We continue to closely monitor the events surrounding the pandemic.  Read our COVID policies and precautions here.

We were nominated for Bucks Happening List 2023! You can cast your votes here.

Gone, but not forgotten

The history of the ActorsNET of Bucks County has been written by a cavalcade of devoted, talented, fascinating individuals who – each in his or her special way – cherished live theatre, and particularly loved this company. This page is devoted to happy memories of those whose work is done, but whose contribution to this theatre is not forgotten. Their spirits continue to inspire us. 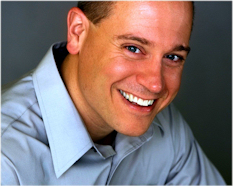 On March 15, 2011, our beloved friend and co-player Chuck Donnelly passed away after a long illness. He was 43. The NET is still reeling from his loss. Regular patrons will recall in his brilliant 11-year career, almost exclusively with us, that Chuck shone on our stage in such shows as The Andersonville Trial, The Tempest, Macbeth, Arsenic and Old Lace, Visit to a Small Planet, and so many, many more. In fact, he graced our stage in more than 60 productions. Despite his illness, Chuck heroically starred last season as James Tyrone in A Moon for the Misbegotten, opposite his bride, Kyla Marie Mostello Donnelly. Ironically, a few shows before, he had played Mr. Brink, the emissary of Death in On Borrowed Time.

Chuck was proud of how gently his Mr. Brink claimed those he would lead into the next life. We’re told he too passed away gently, with a smile on his lips. We give thanks for that blessing and extend our heartfelt condolences and love to Kyla, his son Shane; to all in the Donnelly and Mostello families and all in The NET family who loved him. We who worked with Chuck will always remember him under stage lights — singing, dancing and acting his heart out. Rest in peace, dear friend. Nobody has earned peace more. 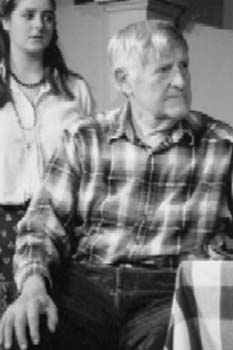 The producers dedicated our 2005 encore production of The Petrified Forest to the late Gordon Day. This delightful character actor played the role of Gramp Maple in our original run back in May 1997. A Solebury resident, he was a close friend and a mainstay performer with Town and Country Players. Gordon played in both The Petrified Forest and our 1998 run of The Chalk Garden – all the while battling the cancer which eventually took his life.

Gordon was always quick with a joke – at least one new one every day. With his marvelous wit and twinkling eyes, it was difficult for those who knew him to grasp that he flew combat missions during World War II and was a genuine American hero. It was this heroic nature and this unselfishness that kept him acting until the end. And, incredibly, he thanked us for allowing him to keep treading the boards!

Gordon Day left us early in our company’s history, but his memory lives on. On days when we’re too tired to do anything, we think of Gordon – and then we just go out and do it, the way he would. He was a treasure.

REMEMBERING JEAN STIEBER
The producers dedicated our June 2001 production of Do Black Patent Leather Shoes Really Reflect Up? to the memory of the late Jean Stieber – a brilliant pianist and musical director, with a smile that could light the darkest day. Jean has accompanied and performed in musicals in the Greater Trenton area for more than 30 years. An elementary school music teacher in the Trenton and Hopewell, NJ School Districts, Jean was musical director for our NETStock 2000 run of The Roar of the Greasepaint, the Smell of the Crowd and that year’s Summer Stars productions. A little lady, perhaps four foot ten, she had a big heart and a huge love of life. The kids and teens loved working with her. Few knew at the time she was waging a courageous battle with cancer, which ultimately claimed her. Jean battled until the end. The week before our May-June production of Show Boat! opened, she was hospitalized for the last time. She had the script and music for Show Boat! with her. She was fighting to get strong enough to be in that show’s chorus. She died at her Newtown home with her devoted husband, Jim, by her side.

For the record, the show dedicated to Jean – Do Black Patent Leather Shoes Really Reflect Up? – went on to be named by Princeton Packet critic Stuart Duncan as one of the area’s best productions of that year. The cast and production team had some very special help in that show – a guiding angel, Jean Stieber. 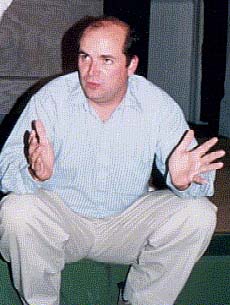 REMEMBERING PHIL FAGANS
The producers dedicated our Oct. – Nov. 2006 production of the musical Something’s Afoot to 38-year-old actor Phil Fagans, a NET mainstay for many years and a second season co-Most Valuable Performer (MVP). Phil sustained a head injury in Trenton while working as a painter on the weekend of 10/20. He passed away Nov. 1st.

Phil was a fine character actor, a loyal friend, a dedicated colleague and one of the nicest people you’d ever meet.

Phil joined The NET at a time when he had spent several years away from acting. He explained he had to get back to it because “every day out of theatre sucks!” No role was too small for him to tackle. He was as much at home onstage in Morrisville as he was onstage in NYC when we took our The Christmas Carol Conspiracy: Scrooge’s Revenge to off-off-Broadway for a limited run. In fact, he coached a few New York actors on how to quickly build a character and apply their makeup.

Few people make such an impact that they are simply known by their first name. In the world, there was Elvis, Madonna and, at The NET, we had Phil. Not a show goes by where he isn’t missed. Jean battled until the end. The week before our May-June production of Show Boat! opened, she was hospitalized for the last time. She had the script and music for Show Boat! with her. She was fighting to get strong enough to be in that show’s chorus. She died at her Newtown home with her devoted husband, Jim, by her side. For the record, the show dedicated to Jean – Do Black Patent Leather Shoes Really Reflect Up? – went on to be named by Princeton Packet critic Stuart Duncan as one of the area’s best productions of that year. The cast and production team had some very special help in that show – a guiding angel, Jean Stieber.

REMEMBERING TED HOAGLAND
We also dedicated Something’s Afoot to the memory of actor/director Ted Hoagland (1957-1991). Ted passed away too young, but left us a fond memory of the Princeton Community Players production he had directed years ago – starring Cheryl Doyle as Miss Tweed and Joe Doyle as Flint the Caretaker. While characters in this show sing that they “owe it all to Agatha Christie,” the NET Co-Founders publicly acknowledge that we owe it all to Ted Hoagland – our friend and inspiration! We hope he continues to watch over our efforts from somewhere in the cosmos. And, we hope he approves. 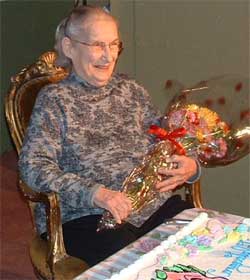 REMEMBERING JUNE RAMBERG
(Excerpts from a press release, April, 2007)
MORRISVILLE, PA – The co-founders of the Actors’ NET of Bucks County have issued a statement mourning the passing of June Ramberg of New Hope.

Mrs. Ramberg — the mother of NET Artistic Director Cheryl Doyle of Morrisville — passed away in hospice in Doylestown on April 11. She was 83…

“My mother, June Ramberg, was an amazing woman,” Ms. Doyle said. “She instilled in me a lifelong love of theatre and the spoken word. I remember how she could imbue anything she said or read with beauty and special meaning – whether ‘singing’ my baby brother to sleep by reciting ‘The Owl and the Pussycat’ or thrilling churchgoers with her dramatic reading of the lessons during Holy Week. Also, she taught me to respect and love the audience, and this is a cornerstone of my own work even today.”

“When Cheryl and I started our theatre company, June was the first person we sought out for advice,” Doyle noted. “Starting a theatre and training actors had long been a dream of hers. Her counsel guided us in forming our nonprofit theatre company and setting the standards we maintain. She encouraged us to go forward and always led the cheers and applause. June was the original ‘cockeyed optimist’ – always seeking out the good in people and situations. It was impossible to be discouraged in her presence. She thought of problems as challenges; the bigger the problem, the greater the challenge.

“June loved theatre and the creative process,” he continued. “She sought out plays that raised the human spirit, that inspired. And in a thousand ways – big and small – she encouraged cast members to give the best they had to give. A disciple of the old school of acting, June stressed projection and clear diction. Her elocution lessons to the young students in our Summer Stars program made learning fun. She taught our kids to speak properly and many of them, in turn, amazed their parents when they brought their new, improved speech into their homes. And she always encouraged them with the motto, ‘Be brilliant.’

“Casts and production crews at Actors’ NET tend to think of our company as being a family,” Doyle observed. “If we are, it’s because June Ramberg was our matriarch. She inspired us to love the art and the artists – to transform theatrical space into a refuge from the harsh realities of life. Actors’ NET is her legacy. June’s spirit will guide our efforts for the rest of our days. And those she has touched will go on to carry her infectious love of theatre to countless others throughout time — a great legacy for a great woman.” 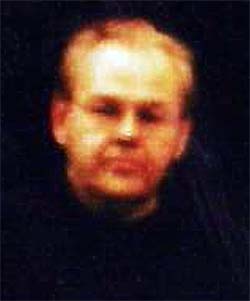 REMEMBERING TED GONTARSKI
Ted’s long and varied career embraced several of his loves: broadcasting, industrial photography, voiceover announcing and technical theater. He produced and directed for television stations in his native Boston as well as in his adopted home, Philadelphia. His voice was heard in hundreds of commercials and industrial videos. He provided photographic imagery for advertising agencies and corporations throughout the Delaware Valley. But his passion was always the theater. He designed lighting and/or sound for professional, industrial, institutional and community productions from New England to New Jersey and Pennsylvania. He designed the lighting and sound for Final Breath, in its world premier at the Walnut Street Theatre Studio 5 in December 2002. His other clients included North Shore Music Theater, Monmouth Conservatory Opera Workshop, Berkshire Theater Festival, Media Theater, the ActorsNET of Bucks County, Town & Country Players, Horizon Dance Alliance and the US Mint, to name just a few.

Years before one could easily find any sound on the Internet, Ted showed endless resourcefulness in creating sounds. Cheryl recalls, “Ted was working on a very difficult sound plot for Lips Together, Teeth Apart, which I was directing at Town & Country Players, and he needed the recurring sound of a bug zapper. He tried recording bugs being zapped, but they wouldn’t come near the thing. So he started throwing things at it to get the right sound… including bits of chopped meat. But he found eventually that shredded provolone worked best. I was delighted at the mental image of this dignified man sitting there throwing cheese at a bug zapper while the tape rolled!”

Gone But Not Forgotten

Actors NET, Inc. is recognized by the IRS as a non-profit, tax-exempt 501(c)(3) corporation. Charitable contributions are deductible to the fullest extent of the law.